Love Me Some Incentive Plans 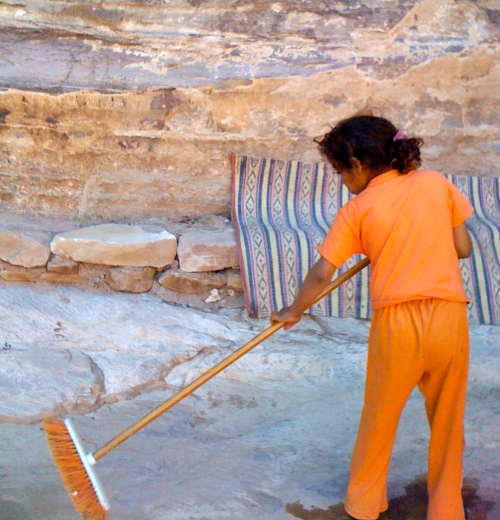 I know a guy who looks like a Hispanic werewolf and dresses in the garb of a caterer. This is because he is Hispanic, happens to have a thin layer of black hair covering his cheeks and yes, he works in catering. Given that he looks like a lycanthrope, you won’t see him on the floor of any galas to promote “the arts.” Nor will you see him collecting plates at quarter-million dollar weddings. And you most certainly will not see him refilling glasses of champagne at some Persian girl’s sweet twenty-two.

No, this uncouth man remains behind the scenes. He pushes carts of tepid food from an upstairs kitchen to a downstairs closet where better looking people will ungraciously ask, “what took you so long?” Then they’ll take what he has brought and send him back for more. He makes eight-bucks an hour.

We met in the elevator. He was sweating and reeked of mass produced pommes dauphinoise. I took a step back, “How’s it going?” It took him a minute to catch his breath. “Good, man. Good. Except this,” he rolled up his freshly pressed and recently stained shirtsleeve and showed me his elbow. It was wrapped in a black brace. His forearm was hairy and his elbow was bulbous. “Fuck it hurts.”

“What happened?” We had twelve more floors to go.

“Work. They’ve got me carrying all this shit by hand because one of the carts broke. I had to work sixteen hours yesterday. Two weddings. Fucked up my arm.”

The elevator dinged and we both exited on the fifteenth floor. It was home to the kitchen and also the corporate office. I was headed there to request the weekend off. I had a lead on boat. It belonged to a co-ed of privilege from Gorda Beach whose parents would be out of town. I was trying to get to an island, swim with sharks, cultivate a tan, drink too much and shave the head of a stranger. The forthcoming weekend was a holiday of significance I could not place. I am neither a banker nor a historian. All holidays blend together. “If it hurts so bad, why didn’t you take today off?”

He looked around, presumably keeping an eye out for a close-shaven superior with a receding hairline and a penchant for hassling female staff members. “There’s no one else,” he confided. “They told me I had to come in.”

He ripped off the brace. He bent his elbow and offered it to me. Sweat rolled down the eggplant mound. It looked like someone had delicately applied a purple Playdoh cast to his bloated elbow.

“Ouch,” I was trying to spend the least amount of time on this particular floor. I feared contact, conversation, and possibly a one-on-one confrontation where a slightly more powerful minion would try to strong-arm me out of a weekend of UV exposure, hoppy beer, and foreign skin on a commandeered sea vessel. “You probably want to report that injury and take a few days off. They can’t make you work when your arm looks like it’s got elephantiasis. I gotta go.” I turned to walk away. He grabbed my sleeve and I felt his fingers transfer grease from the chorizo stuffed, bacon-wrapped dates he had smuggled for breakfast.

“I can’t report it. I won’t get an iPod and everyone will be pissed at me.”

Poor guy, I thought. He looks like a werewolf, smells like chorizo, works like a dog and has the IQ of a goldfish. “What are you talking about I asked?” I looked at my watch. I had three minutes until my parking meter started flashing red. He reached into his back pocket and pulled a letter out of a folded envelope.

In an effort to reward those team members that help ####### Catering Company become accident free, we have established the Accident Free Incentive Plan. Every employee in the locations that have no reportable workers compensation accidents for each quarter will receive the following incentive awards:

I looked up at my disabled paisano. He urged me to read on. “We’re on the third quarter,” he said. I scrolled past free movie tickets (quarter one), a company issued watch (quarter two)…

Third Quarter Accident Free: ####### Logo Hooded Sweatshirt and be entered (sic) in a drawing to win one iPod Touch for each location

“Umm,” was all that I could articulate. “I’m not sure this lose a limb for the team thing is in your best interest.” The elevator’s bell rang. I handed back the letter. He shoved it in his back pocket and pushed his rolling stall, which was once full of overcooked rotisserie chickens toward the kitchen. The elevator doors parted and a man dressed like Agent Smith with sallow skin and a head like a sixty watt light bulb shouted, “Where the fuck have you been?” My hairy compadre hastily reapplied his arm brace. He bowed in obedience. Sixty Watt Smith grabbed the werewolf caterer by his hairy wrist. He flinched slightly. “Your sleeve is rolled up,” Smith said. “I’m going to have to write you up for that.”

Sixty Watt Smith blew past me into the corporate office. My disabled and beaten amigo got all Hunchback of East L.A. and hobbled back into the kitchen. I requested the weekend off and it was granted. In two weeks Sixty Watt Smith will have less hair, I will have a better tan and the Hunchback of East L.A. will probably have one arm. All of us will have a chance at winning the “new” iPod Touch.