I’ve watched “…And God Created Woman” about fifty times. Each time I watch it, I wait patiently for the moment when Brigitte Bardot will stomp around naked in a rage or a fit of lust or as an attempt to cool off in the Mediterranean.

I wait the whole movie for that scene because it seems inevitable. Especially, when you consider the opening, Brigitte Bardot ass up in the sun, tanning ever so discretely behind her foster parents’ laundry line. With that kind of opening, I have to believe that’s just a taste of what’s to come.

I mean, I don’t watch that movie just to see Christian Marquand act like France’s favorite misogynist. And I only sort of watch it to see an old rich guy like Curd Jurgens struggle to manage his obsession with St. Tropez’s biggest floozie. Sure, I watch it for that, but mainly I watch it because I have to assume, for all the lives Bardot is ruining as she rolls around in the sand with Marquand or when she’s tanning topless on a busted boat in the shipyard, the big pay-off will be gratuitous Bardot nudity. Is that so wrong? Is that so much to ask? 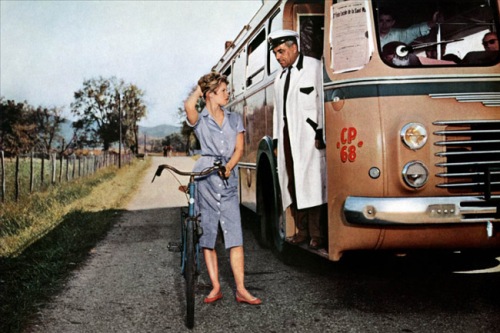 As a matter of fact, every time I wait ninety-odd minutes for said scene(s) I’m letdown. For all that she puts us through, for all the highs and lows—for the bullet Curd Jurgens takes and then doesn’t report because he knows that the police don’t understand matters of love—we never see her completely naked. Isn’t that tragic?

Sure, there are a million ways to see Brigitte Bardot naked, but I’m talking Brigitte Bardot circa 1956, in St. Tropez. The one that curb-kicked hearts and road a bicycle to a book store where she sat about not giving a fuck all day long. The orphan daughter of a merchant marine! She tried her hardest not to turn her husband into a cuckold. She really did. I saw it. It was a valiant effort, too. Lounging about in the Tardieu villa, dancing the cha cha cha alone, not eating apples, not drinking brandy… until of course, she ended up drinking brandy in Bar des Amis with sailors and hookers and later she danced with what appeared to be a band of Domos or possibly Cubanos.

And still, she’s fully clothed or very close to it. She’s running her hands through her hair, which looks awful but that’s fine because she’s running a fever and the salty air has fluffed her hair into a dry blonde head piece. But that’s acceptable, again because the fever, and her all-engulfing love for Christian Marquand are doing this to her. And it’s not fair. She’s tried so hard not to let this happen, but these bongo playing brothers can really dance and that’s the only that makes her forget that she’s got a hard life being married to a boring ship repairman in St. Tropez. What a terrible life!

They’ve just sold their land for four million francs and a thirty percent stake in Jurgens’ ship repair business. He loves her and he’s going to open a casino. She’s richer than she’s ever been! She’s going to get that car she’s always wanted, but she’s also in love with Christian Marquand and he’s an asshole. The worst kind. Jurgens says Marquand lives in the Stone Age when it comes to understanding women, and I think he’s right. But none of that matters because he’s tall and handsome, lean and tan from the hard life of St. Tropez. What a hard life it must be…

And still, she doesn’t give any of us what we want. Not one of us. So I watch it again, hoping this time will be different from the last, which might be silly if you’re immune to the bicycle riding, book selling, chemically imbalanced, irrational Brigitte Bardot who just wants to dance the cha cha cha and lay on the beach. But I’m not immune. And besides, I want to see Jurgens brush off another bullet wound because the police don’t understand matters of love and he does… If nothing, he understands such matters as he bleeds to death in the passenger seat of his convertible while the man who Brigitte loves drives him away.

Little known fact: Neil Young has always felt like Jean-Louis Trintignant’s character in the film so he wrote this song about it. There’s a French version, but the accordion kind of drowns out the lyrics.