Poolside with Father John Misty and his merry harem.

Father John Misty has a few lines that go like this:

and the actress wishing that they could”

Last night, I was in Hollywood at a hotel bar. It was packed with boys and girls who had the sides of their heads shaved and curly pompadours resting on top. Ironic rap music played. In the background, there was a pool where scantily clad, or entirely naked girls practiced unsynchronized swimming. Which is to say, they were performing, just not together, which was a shame.

I bring up Father John Misty and that quote because in the above setting, in Hollywood no less, I was literally rubbing elbows with him (dancing at close range) while also pretending I didn’t instantly recognize him and I hadn’t already seen him play live twice in the last month. So, there I was feigning cool, but I got the distinct impression that if I were to recognize him and own it, in an act of, “Dude, bro, man you’re awesome!” I don’t think I would have been fulfilling his unspoken longing to be recognized.

Several facts point to the contrary: he was out in Hollywood, which is a good place to be if you want to be recognized. This next point is creepy, but he was wearing the same green jacket as when I saw him play Bardot last month. If you wear the same clothes, you’re easier to recognize. For example, Joseph Gordon Leavitt. He wears essentially the same clothes in every movie so even when you put Bruce Willis’ jaw on him, he’s easy to spot. To defend my original observation, it was a hundred degrees that night. A green jacket, in a military style, stood out in a room full of half-naked girls.

Half-naked girls seem to be a theme. It’s unrelated to weather. I’ve seen them shivering in January.

It’s worth mentioning, Father John Misty wasn’t alone. He seems to travel with a harem. Not a half-naked harem, but rather a group of women who wear clothes and, now this is the crazy part, they appear to be THIRTY YEARS OLD. Or maybe even older. OLDER THAN TWENTY-SOMETHING?!? They’re women, and they’re at a hotel party and they’re not naked or twenty-something. Or younger. I mean, weird, right? In Hollywood? And their clothes—they didn’t look like they were vacuumed to their skin. Some of it was loose. Like hippies used to wear. It looked comfortable. They looked comfortable. In fact, one of these women who talked to me about Biggie Smalls who I encouraged not to talk to the DJ about Biggie Smalls as I knew the DJ because I used to eat the food he left in our communal refrigerator in 2007—this woman looked like a Velma. Velma from Scooby Doo, but more refined. Older and without a turtleneck and with a penchant for nineties hip hop and swaying her hips.

She wasn’t interested in anything I had to say. I think she was on drugs. I think everyone was on drugs, but not the usual drugs. They weren’t grinding their teeth. F.J.M., Velma and the rest of the harem looked like they weren’t afraid to say “far out”, shake their hips and act like they don’t care because they really didn’t. They were just at The Roosevelt to enjoy each other’s company, dance to ironic hip hop and not be recognized. Weird.

Two hours later a lawyer, synagogue employee, a bartender with a withered leg and yours truly are slamming Schlitzs at last call.

One hour later, the same group is drinking whiskey on the floor of a vacant apartment.

No one is quite sure about the next six hours, but I can only assume the harem took off their clothes, and probably F.J.M.’s clothes, too. 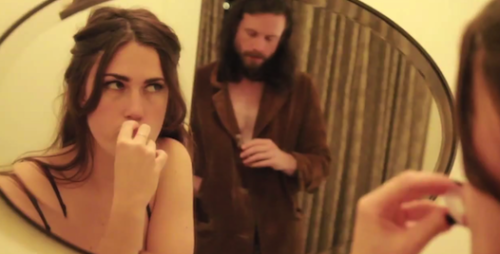 8:00 a.m. rolls around and I’m in a cab, on my way to Mid-City where my car and a parking ticket await. The hangover doesn’t wait. It’s up before I open my eyes.

9:00 a.m. the synagogue employee finds god (in the toilet bowl.)

11:00 a.m. the bartender with the withered leg is on a date downtown. He’s eating sausages, talking Rothko and sampling seasonally brewed beer.

By noon, I’m trying to order ayahuasca so I can do like F.J.M. and get a harem.

One response to “Poolside with Father John Misty and his merry harem.”