The Profound Effects of Losing an Arm Wrestling Match

My Lyft driver drops me off in a part of the Arts District that has apparently yet to be reclaimed. The door to the industrial building is unlocked. Inside, the lights flicker over the empty hallways and I don’t feel especially safe. But I’ve got my eyes trained on my phone, giving my driver who got lost twice and spent the whole ride complaining about people who complain about gentrification, five stars.

When I push through the door of #4, my friend who lives in Santa Monica but never seems to be there says, “You didn’t run into those pit bulls did you? I should’ve told you about the pit bulls.” I did not. He seems relieved and pours me a drink. 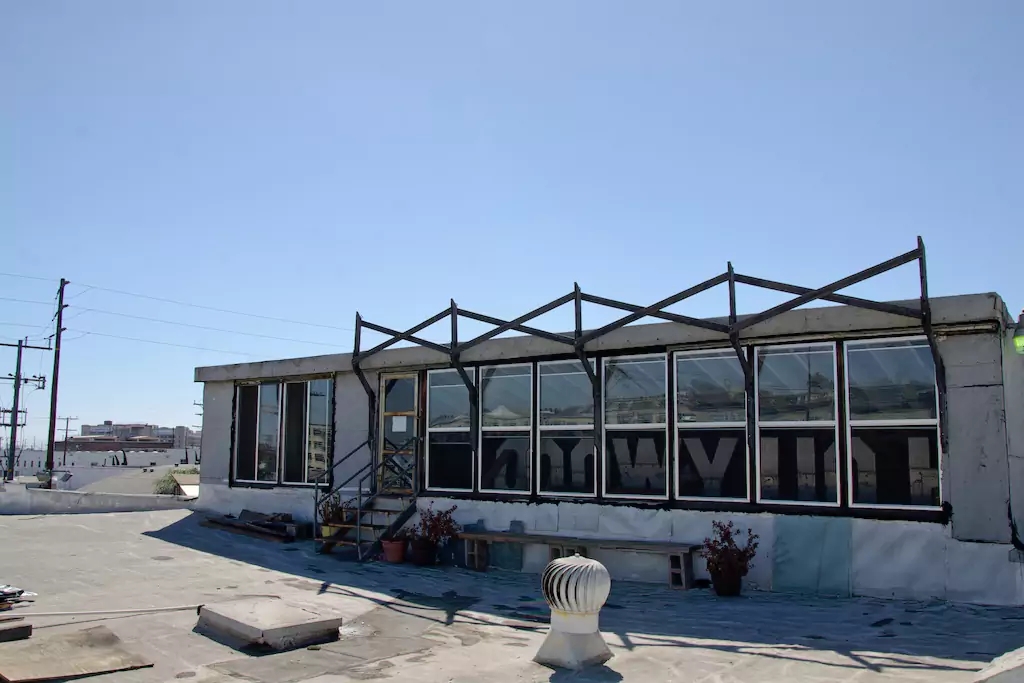 Because no one can resist a rooftop after a few drinks, we crawl through a window and onto the roof. We peer through sky lights and hope to catch people in their most intimate moments: shadow boxing with the mirror, singing Frank Ocean to their pugs, eating kimchi in front of an open fridge while Ira Glass’s voice emanates from their phone. We peer into twelve living rooms and even a couple retail spaces. A few TVs are on, half-drunk glasses are sprawled across long dining room tables, laptops are open to email accounts, but no one is home. It’s midnight.

I stand at the edge of the building and wonder why I’m not feeling that thing we’re all supposed to feel when standing on the edge – the desire to jump. I think it’s because we’re not up high enough. Only four stories or so. You’d be lucky if you belly flopped and died. I set a bottle of Modelo on the lip of the building. If I was younger or drunker I’d toss it into the middle of the empty street but I don’t have the desire to do that either.

It’s FYF weekend and a steady stream of the artists playing tomorrow are being cycled through the loft’s speakers. We talk about Malcolm Gladwell’s podcast and Joachim Trier’s editor and the Spanish repatriation of Sephardic Jews. There’s a moment where we quietly wish our ancestors had been booted from Spain five hundred years ago so we could spend our summers on Mallorca and not worry about leaving the Schengen Area after ninety days.

This might be the first time I’ve been at a party in a loft downtown where everyone isn’t doing coke. I mean, there’s coke here, but it’s all very discreet. A conversation about its source, an apology about coming up short on a few other pharmaceuticals for tomorrow’s festival, a confirmation of a Venmo payment received. I remember when people used to buy drugs with cash. Still, the party is very grown up. That is until someone mentions arm wrestling.

The last time I laid elbows and locked thumbs would have been the Carmel Middle School cafeteria. But really what we did there was play that game with quarters where we bloodied our knuckles. We did that and sat around waiting to be old enough to drive a car and tell everyone to fuck off.

I learned to drive a car, but I never got around to telling anyone, let alone everyone, to fuck off.

I lock hands with my friend – the one who has his mail sent to Santa Monica – and to be honest, I expect to win. It’s a delusion that I have. I always expect to win. I’m not talking about winning Jeopardy or checkers, I mean two men doing anything physical where only one can win. So I’m surprised when I put everything I have into it and I lose. Twice – left and right arms.

We shoot some more tequila. I talk to a guy who’s dedicated his life to working in the gardens at some monastery in the middle of Koreatown. For a moment, it seems like he might try to recruit me into the brotherhood of dudes who like to meditate and don’t mind carrying stones. I’m making up the part about stones, but the garden is real. Monks love gardens and beer, and I am perfectly fine with gardens and more than willing to drink beer. He doesn’t recruit me.

I show a girl from Dubai a picture of my family. I eat two slices of margherita pizza. I realize my shoulder is killing me, grab another Modelo and another slice of pizza and stumble out into the street. 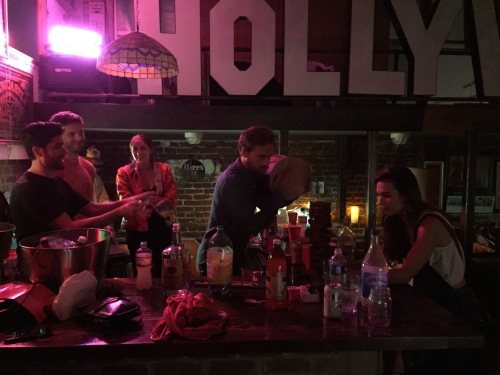 Unless you’ve lost an arm wrestling match on the bar of a loft in the 30th year of your life, you don’t know my pain. And this particular pain runs deep. Or at least deep enough to send me to the gym on a Saturday. Like Rocky summiting the stairs in Philadelphia, I arrive ready for the workout of a lifetime: blood, sweat, torn calluses – but alas, I’ve forgotten my headphones – so I just trot down to the sauna instead.

It’s the usual crowd: an Asian dude in his sixties, four Armenians guys in the their twenties who may have just walked in off the basketball court and an older Armenian guy who I imagine spends his days in a track suit when he’s not nearly naked in a wooden box full of men. Pretty soon it’s just the two of us – me and the older Armenian guy – and I’m reaching the fourteenth of the fifteen minutes I had planned to be in there, when he says, “Do you like to have fun?”

“Not especially. I mean, I will, but I don’t seek it out the way I used to. I don’t have the energy for it.”

“Funny. I like that, and because I like you, I want to let you in on something.” He reaches into the pocket of his red Ralph Lauren swim trunks and pulls out a business card. It’s black and wet with what I hope is just the condensation in this sauna and not his sweat. He hands me the limp card and winks.

It takes both of my hands to hold it up flat so I can read the words: V.I.P. Companions. There’s a 1-800 number and the promise of discretion for “gentlemen who seek the companionship of beautiful, interesting and quiet women.” I hold onto the card for longer than I mean to because I’m imagining a harem of mute women. Dozens of non-speaking models. How do they find and enlist all these beautiful mute women? I’ve never met a person who didn’t speak – are they notoriously attractive?

“I appreciate it but I’m—” I point to a ring that isn’t on my finger because I left it in my car when I was still under the impression I was going to lift weights today.

“Married men can have fun too.”

“Right, but you may recall my stance on fun – I’m not really seeking it, generally speaking.”

I massage my shoulder, remembering the defeat of last night’s party. I can’t take any more parties. I’m retired from fun. I try to hand the card back again but at this point it should really just be thrown away. The black sheen is now stuck to my fingers. It looks more like leftover squid ink pasta than a business card. I put the crumbling remains in my pocket.

“You deserve to be happy, my friend.” With that, he stands, winks and walks out. I’m on the verge of passing out as I enter the thirtieth minute of my time in the sauna, so I’m only able to give him about a fifteen second head start.

Then we meet up again in the locker room, shower side-by-side because we have to, and he doesn’t say a word to me. But he winks again. I don’t know what’s worse: losing an arm wrestling match, having a card for an escort service in my pocket or being repeatedly winked at, but here I am, taking it all on the chin.