I once had lunch in La Mancha with a man named Victor. We drank wine, ate paella, and two hours later I watched him kill a bull with a sword. I left Spain shortly after that, but not before he gave me the slain bull’s ear. It was bigger than my hand. He wanted to make sure I didn’t forget him.

I’ve never killed a bull, but I have helmed a 1994 Camry that bucked with the same force as those bulls that Canadians on amphetamines ride at rodeos. Unlike those canucks, I don’t own a truck. Or a horse, so I had to get my bucking hooptie fixed.

The time had come to retire my largely incompetent mechanic’s coveralls. Sure I never understood a word of his broken English. And yes, he cost me thousands of dollars and tens of hours in his incompetence. But we had fun. He’d grumble something presumably related to my spark plugs or Soviet Armenia and then he’d take my credit card for a joy ride. I’d leave with a handwritten receipt, the Check Engine light still glowing. 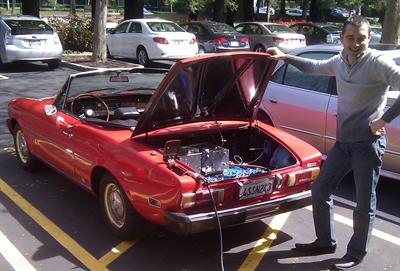 The new shop I moved on to is very corporate. They keep the mechanics in the garage and they have girls working at bistro-style check-in tables. The girls are nice, but instead of asking about my car, or its problems, we go into their life story: their fiance’s job, their gym routine, the pros and cons of fish oil. For a moment, it feels as if I’m stuck on an airplane next to a nice lady who is probably flying to Sacramento or Santa Fe. Before I leave she says, “Well, it’s a good thing you did stop bartending, because you aren’t always going to be pretty.” She takes my key and she promises to call.

I stop by after work to have them swipe my card and retrieve my car. The girls smile and say, “If there are any problems, just drop it off again.”

I do. Every morning. For the next five days. And each day they call me to say they’ve spotted the elusive problem and for a nominal fee they’ll address it. I agree.

Each day I return to work, several hundred dollars poorer than the day before. After a week of hearing about my automotive woes, my co-worker says, “You’re familiar with the definition of insanity, right?”