The Neapolitan Mastiff Delves Into: Manhood

Hugo De Naranja and I have discussed at great length what it means to be a man in the twenty-first century. We even wrote a pilot about it, which was wildly praised and largely ignored. There was a blowfish involved. It was brilliant. Today, with Oscar nominations out and the President’s State of the Union address on its way I ask the tough questions. I ponder the State of American Manhood. I merely ask and I do not answer because I am not the President. I am simply an absentee voter in the lowest tax bracket.

So before we argue about whether Paul Giamatti got snubbed or snarkily comment about Republicans and Democrats sitting side-by-side, let’s just be happy Johnny Depp and Angelina Jolie didn’t get nominated.

Okay, now that we’re happy about that lets get back to the tough questions. Be warned: some may involve immense reflection.

If you’re better at navigating the Farmer’s Market than what’s under the hood of your Volkswagen Golf—are you still a man?

If you prefer turkey burgers—are you still a man?

If you’ve ever turned up a Lady Gaga song in the privacy of your own motor vehicle and enjoyed her shrieking “Alejandro!”—are you still a man?

If you’ve ever seen a six-year-old unwrapping a peanut butter and jelly sandwich and pined for your lost youth—are you still a man?

If you wear socks with your loafers—are you still a man?

If you wake up one morning with a Chihuahua snuggled on the pillow next to you—are you still a man?

If you drink vodka masked by cranberry juice—are you still a man?

If you own tweezers—are you still a man?

If you cried at the end of A Farewell to Arms—are you still a man?

If you floss daily—are you still a man?

If you believe, after a long day of doing whatever it is that you do on your long days, that you deserve a ceremonious bubble bath—are you still a man?

If you’ve ever thought how delectable a glass of champagne would taste on a sunny afternoon while your peers hardily indulge in pitchers of watery Mexican beer—are you still a man?

These questions are not dealing with one’s anatomical situation. Rarely has a man, by the wrath of something larger than man itself, been slowly castrated because he knew how to properly iron a shirt. These questions transcend sexuality because we live in an era when all men are equally aware of the gastronomical advantages of free-range chickens.

I ask these questions because now that Larry King is retired, who is left to get to the bottom of this? Who will ask the hard questions, if not me? Anderson Cooper? Fox News? The Burmese Association of Professional Journalists? I think not!

Filed under Information Pertinent To Gratification, Staring Into A Cobalt Pool, Uncategorized

One type breaks male and female necks garnering attention that isn’t always positive. The other bickers to anyone who will listen about how they’re either: too mature, high-brow, gluten-free or sober to dress like the recession stripped them of everything, but an evening’s worth of MAC make-up and a push-up bra… oh yeah and a pair of angel wings. Or Hermione’s wand.

While the glorified stripper parades around the party like a free piece of day-old U.S.D.A. choice flank steak, the girl who dressed up like an Oompa Loompa, orange face paint and everything, is secretly wishing she could pull a Tonya Harding. Alas, the anti-slut, because she’s mature, cultured, hip to the point of suffocation etc., will instead snidely roll her eyes and tweet/status update about Halloween’s misogynistic roots.

Age usually plays a factor. Anyone who has ever been on a college campus during Halloween knows that there’s only one type of girl in the freshmen class that really thrives. From Isla Vista to Tempe to Indianola Avenue, she’s got her face in front of an ice loge, she’s wearing an obscene amount of make-up and just enough body paint/stickers to not get arrested for public indecency. Granted, there are plenty of girls over the age of eighteen or twenty-one that still wish to be the most objectified belle of the ball.

There’s an art to wearing nothing, while still getting recognized as someone in costume. The shrewdest of this, not particularly shrewd group, knows what makes or breaks a costume without a costume happens above the décolletage. i.e. Pippi Longstalking

And that’s where anti-glorified strippers are born: in the K.Y. ring.

Sure there are exceptions. Not every anti-glorified stripper has a video or two floating around of them flashing Spring Breakers when they were eighteen. There are exceptions. Maybe they were fat when they were freshmen or they were in committed relationships. But dealing strictly with the facts, fat girls don’t really get applauded for wearing nothing, but wings and half of a green corset as a Tinkerbell costume. It just doesn’t fly. (Somebody hit a cymbal.)

This isn’t good for anyone. This isn’t good for her self-esteem. It sucks for the guy who’s driving her home, and it generally kills the morale of the party. In fact, the only person who doesn’t get sprayed with this shrapnel of negativity is the glorified stripper who is at this very moment slamming vintage 4Lokos in the kitchen while getting fawned upon by half the party’s male population. While the other half look on  a.) Wishing their date looked like that or b.) Convincing their date that they hate it when girls don’t wear clothes or c.) Thinking they would give a limb to engage the glorified stripper who hath cast a net of pheromones over the party. 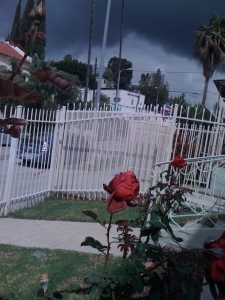 There are mornings when you catch yourself in the mirror. From maybe three or four meters away, just the slightest glimpse. You stop and stare. You’re probably wearing something stark — simple, you’re probably dressed in black. You notice a tan that’s snuck up with spring. The mirror is small and you’re far enough away that you can’t help, but turn your entire profile towards the 12×17 inch frame. In this light, with this backdrop, you can’t help but say to yourself, “shiiiiiiiiit.” Under these circumstances, you are flawless.

But this morning was not that morning. This morning the only thing the mirror did was mock me unabashedly and at close range. It pointed out the most miniscule bit of toothpaste residue sitting on the outlands of my lip. Flawless was not the word that came to mind.

A telegram arrived this morning. That’s what I was doing up, walking around, catching myself in the mirror. Jack Arranda, the concierge, tried to delicately slip the note under my door where he hoped it would skate across my obsidian floors and rest in plain sight.

What Jack Arranda forgot: I employ a mat on both sides of my front door. This is for sanitary purposes. I awoke out of a momentary slumber to Jack plunging my telegram into the secondary carpet. Jack is a gentle man, two words; he’s also a social leper.

I jumped out of the hammock and slid a la T. Cruise in Risky Business across the obsidian in my birthday suit. Upon arriving at the door, some thirty-seven meters away, I plucked the telegram from Jack’s well-manicured digits.

“Thank you, Jack.” He whistled something that sounded like the opening to Ravel’s “Bolero” in response. In fact, I was my favorite part, if I heard correctly. Holding the telegram, I slunk to the floor.

The telegram was alarming in itself. Aesthetically, it was obvious the envelope  came from some high-end paperie. The kind of place, you find  buried deep in the city’s Flower District when you’re looking for answers; answers about why the Saritaea that was supposed to cloak the bridge of your moat keeps dying. The pigmentation pattern of the envelope was frighteningly similar to that of olive loaf.

The envelope was titled: The Neapolitan Mastiff, Esq. There was an official looking seal that read B.A. and had faintest trace of a woman who was either Hayden Panettiere, Jane Lynch or Eva Perron. Evita, that Nazi hoarding, misandrist who once pulled the nails from my Grandfather’s big toes for selling imitation amphetamines, in bulk, to child dock workers in Tierra Del Fuego.

I inhaled the envelope; it smelled of fennel. I tried to rise up from the floor but my gluteus maximus seemed to have adhered itself to the obsidian. With another effort I was able to rise up. I made a mental note to call Dolores about changing whatever product she cleans the floors with to something less abrasive.

With the note in hand I headed to my desk. There I pulled out a machete I had once traded a cowboy hat for in Van Nuys, Ca.

WHACK! In one fell swoop I sliced off the top. I extracted an alarmingly wet piece of facsimile paper. I had an inclination, as to whom this was from, but when I saw the paper I knew it could have only come from one man, Jay Mapelle, The Argentine…

Jay Mapelle, is by trade, an optometrist and contact lens expert, who deals exclusively with Catalan Pyrenean sheep dogs with two different colored eyes, but I knew Jay in his youth. I met J. Mapelle, when I was just a young  dove trainer in Tegucigalpa, Honduras. And Jay? Jay was running a remote campaign from  Honduras for Prime Minister of Canada.

I held the folded up paper and let it collapse open. A watery substance dripped on my bare thigh. I took the sheet by its corners and shook it out like a sandy beach towel before letting it drop opening on the floor.

The text was microscopic. It was one word, which was shaded in all eight colors of the original box of Crayola crayons.

My heart skipped a beat, then another. Jay Mapelle was back! I crawled on my elbows and knees, dragging myself to the kitchen. I was careful not to dismember myself on the raised entryway. Still half-collapsed, I opened the refrigerator door and showered myself in Orangina. My blood sugar was dropping.

I climbed up the SubZero’s door. If the Argentine was back, there was no time to waste. I needed a disguise, a polio shot and a traveling semi-automatic toothbrush. The Argentine may have found me, but I had yet to find him. TBC.

Filed under Red Cups, Staring Into A Cobalt Pool