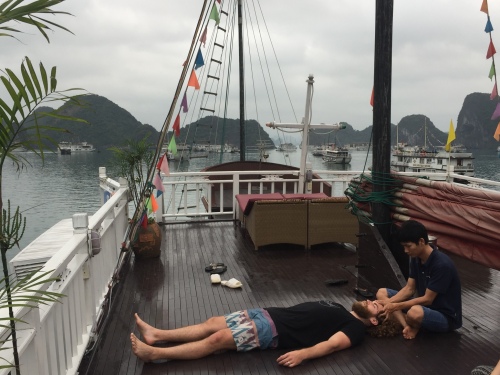 -I was walking home from Trader Joe’s and I saw a group of people shuffling into a colorful building. It ended up being a guided meditation for gay addicts in recovery. It was hard to get a word in, but I decided to stay. I’ve been going twice a week since May.

-On June 3rd, I rode my bike twelve miles to get a taco because I couldn’t find my car keys.

-Nine hours ago, I was shirtless in my bedroom. I was also pantless. But I wasn’t thinking about my lack of shirt or pants, I was watching two flies buzz between my bedside lamp and a photo of myself wearing a suit on a mountain looking very lost.

I’ll spare you the gory details but in quick succession I killed both flies. One with a New Yorker[1] where I was reading about a divorced lesbian couple in Manhattan who were fighting each other for the right to raise Abush. According to the article, Abush is a six-year-old boy from Ethiopia.

Before I killed the fly, I had already decided that these presumably bored (read: loving) millionaires also needed jobs. Or more demanding jobs. Or they could adopt more children from Ethiopia. Or America. They needed to do something to keep Abush as far from the limelight as possible. And I say this as someone who grew up on the Central Coast where there were more kids named Forest than Bill.

But this isn’t about people named after and for shrubbery. Three months ago, I had killed one, maybe two flies in my life. In the last week, I’ve killed at least double that figure. We’re talking upwards of three flies. If I don’t find myself in an air conditioned building with free coffee and a desk with a phone I’ll never answer, I worry that I could kill as many as a half dozen flies before the year is even over. This troubles me.

-Yesterday, I put my left foot on an escalator’s handrail, brought my head to my knee and had a nice long stretch for three floors in the Sunset Boulevard location of Kaiser Permanente.

-I went to the doctor for what I’ve heard called a “check up.” Nothing was wrong with me. I told the doctor that, but also said if he wanted to put his stethoscope on my back and listen to me breathe or whatever, he was welcome to do that. He looked at me like I was fucking insane, confirmed from a distance that, at least physically, I was fine and then told me that they didn’t validate parking for patients. My co-pay was $15. Parking in the structure for 53 minutes was $86.

-I introduced myself to someone who I thought was my neighbor because I’ve seen him on and off for the last five years. He replied, “I’m carrying mace and as a member of the United States Postal Service I’d be within my rights if I used it on you right now.”

-I’ve started wearing sunscreen even though I once saw a poster in the nurse’s office in college with a teenage girl sporting a neon tank top and third degree sunburn. A blurb above her remorseful face read: 80% of skin damage occurs before the age of 18. I was 19 at the time and decided then and there I was never going to wear sunscreen again. The nurse told me that I definitely had alcohol poisoning but the worst was over and to be careful. She was so sincere that I felt one of us should cry. It was a relatively short game of chicken before she walked me out. I won’t say who left in tears because I’m a gentleman.

-I’ve watched both seasons of “All or Nothing” with the LA Rams and the Arizona Cardinals and I have no idea who won the Super Bowl last year.

-I saw a guy wearing a t-shirt from my high school (average class size: 107) and I almost introduced myself.

-On Wednesday around midnight, I got home from hockey and was greeted by two coyotes on the stairs leading up to my place. I thought, “Well, if I have to fight these ‘yotes to the death, so be it.” But then I remembered the flies I’d killed. Flies with fly families and fly children who probably stayed up at night wondering if their fly mother and father loved them and would ever come home; flies that can relate more to Jeff Goldblum than I can because I’ve never seen that movie.

As I stood there, my shoulder going numb from the weight of my hockey bag and my head full of Jeff Goldblum, which is exactly what that fucking guy would want, I saw the coyotes were long gone and while I might not have a job, I did still have four episodes of “The Keepers” waiting for me upstairs, and in this life, well, that’s more than enough.

[1] I signed up for a trial subscription seven years ago and I haven’t figured out how to cancel it. As a result, I’m wildly cultured.