How do I know if my neighbor is a gang member?
Do felons in California have to register their address?
Concrete vs cement?

But before I can dive into my google search history, I have to dig a hole. Three holes to be precise.

The ground is hard, nearly impenetrable. Jonathan Swift said, He was a bold man who first ate an oyster. But I say, He was a self-loathing man who first dug a hole. I have a myriad of tools: a shovel, a thing that requires two hands and looks like it could be used to serve an enormous salad, and something like a jackhammer that’s not a jackhammer which weighs as much as a Shetland pony.

Around each new turn I realize I know nothing of hard work. Last time it was a Jurassic Park-level cactus in my neighbor’s backyard. But that freakish plant is no more. Thanks to some version of hard work, it’s been slain and laid to rest in four trash barrels, each weighing three hundred pounds. Three hundred pounds of cactus gut and spikes. Some of it is still on the ground. Some of it is harpooned in my hands, legs, nostrils. I can’t sneeze without discovering a new alien spike lodged in me.

The mutant cactus is what brought me to the holes. Over time, presumable from when crack ravaged this community until last weekend, it flourished. It ate the fence between myself and my neighbor, just swallowed it whole. And since I now live in an area where people set off fireworks around the clock and the dogs never stop barking, I have taken to believing good fences make good neighbors. Or whatever Robert Frost wrote that people interpret for whatever case they’re attempting to make. So that’s what I’ll do. Misappropriate Robert Frost. 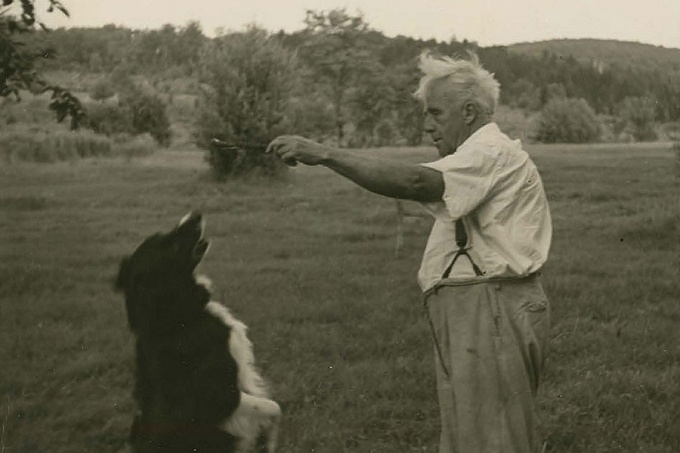 It’s all new to me. Digging holes, a backyard full of toilets and cactus innards, seeing dogs with balls. The only thing that is familiar is not talking to my neighbors. I have that down pat. Other than a guy in Hollywood who I shared a hallway with for half a decade – who I’d drink beers with and talk about how we should find some place nicer to live than section 8 adjacent but we couldn’t beat the rent – I’ve not met one. I’ve just gone about my business not giving a shit about other people except for when it comes to institutional change. There I care. Here, in real life, I’m a bit more self-involved. I have holes to dig, walls to paint and a stack of New Yorkers that aren’t going to read themselves.

But lately I’ve wondered about meeting my neighbors. There is a new version of myself where I am a stranger in a strange land. I’m curious about this other way of life that exists south of the 10 freeway in places that people know from Mack 10 songs and documentaries about the Rodney King Riots.

Last week I was on set in what was supposed to be Columbus, Ohio but was actually the city of Hawthorne. East of the airport, most famous for the abandoned mall where Chris Brown shot “Party” and where gangs shoot each other as often as they can. While the location was being lit, I saw a police officer taking advantage of an ice cream truck that the production bought for the crew. She was 5’2 and her bulletproof vest came up high enough that she could rest her chin on it. While she ate a banana split, I asked: Had development from Inglewood overflowed into Hawthorne? No. Any shifts in the population? What? Any signs of gentrification? Um, we have a brewery now, she said.

I cut to the chase: I have a neighbor with the kind of face tattoos that you can only get in Salvadoran prisons. Should I be worried?

She shrugged, He’s probably a gangster.

Should I introduce myself? How does one exist with a gangbanger as a neighbor?

Under no circumstances am I to do that. Give him a head nod to show that you acknowledge and respect his presence, but then go inside. Stay in your lane.

I keep hearing this. Apparently, that’s how one maintains here: keep your head down. But also on a swivel. The cop tells me I shouldn’t do anything that people aren’t already doing. So no running up on cholos with blueberry pies and smiles.

Then she pulled up a map and systematically relayed the areas that I’m to avoid. All of Imperial. Most of Century Boulevard. Oh and stay out of Lennox. She said, You don’t go to Lennox.

Besides the homicide rate, a quick search revealed that Lennox has an air quality problem (thanks to LAX) that’s Flint, MI water level bad. But it’s in the hood, so apparently no one cares. My own air quality isn’t great. I’ve been huffing paint fumes every weekend for as long as I can remember (read: 2 weekends).

At the end of the day, there were three holes in the ground. Then a post was set. Then concrete that was mixed in a wheelbarrow was shoveled into the ground. I used to be stunned by One Last Poem for Richard. Now a dent in the earth, filled with concrete to support a fence post blows my mind. I think, this must be how they built the pyramids. Me and the Egyptians. We get it.

Of course I didn’t build the fence, but I was there. Across the street, my gang affiliated neighbor lit fireworks then rolled them under unsuspecting cars at the stop sign. I think I might go out of town for the 4th of July.